Just thinking about ticks can make your skin crawl. But if you enjoy hiking, hunting, time at the cabin or other shady, damp environments, encounters with ticks can be part of the package.

We’d all prefer to avoid tick bites, but if you find yourself dealing with one, there’s no need to worry – they’re often harmless. We’ll explain how to identify tick bite symptoms, how to remove a tick at home and when you should see a doctor for treatment.

What is a tick exactly?

Ticks are tiny bugs that have eight legs and are related to spiders and mites. They feed off human and animal blood to survive. Ticks are often found in damp, cool, wooded areas during the spring through mid-summer, then again in the fall. But in some areas, they can be active during other seasons as well.

Types of ticks in Minnesota and the Upper Midwest

In Minnesota and the Upper Midwest, there are about a dozen different types of ticks. The three types of ticks that people come across most often are the blacklegged tick (deer tick), the American dog tick (wood tick), and the lone star tick.

Ticks can vary in appearance depending on the type of tick, its life stage and sex. Ticks can be grayish-white, brown, black, reddish-brown or yellowish in color. They can be as small as a grain of sand in the larvae stage to the size of a pencil eraser when fully grown. 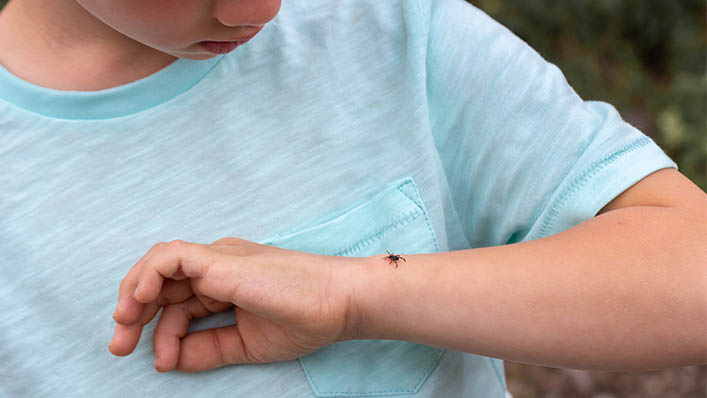 When is tick season in Minnesota?

In Minnesota, ticks usually start to emerge after the snow melts, reaching peak activity during the month of May. They’re typically active throughout June.

As temperatures climb, tick activity declines until the fall, usually around the end of September through October. Tick season ends when temperatures drop below freezing or snow covers the ground.

Many people won’t experience any symptoms from a tick bite, but tick bites can cause:

Most likely, you won’t feel a tick bite because they don’t usually hurt. Ticks are often very small, so you might not see it until it’s been on you a few days and has grown larger. That’s why it’s important to check yourself when you’ve been in places where ticks live.

A small bump may appear at the site of the tick bite. But if it develops into a rash, that may indicate illness. A rash usually appears 3-14 days after the tick bite but it can look different depending on the type of tick. Watch for small reddish or purplish spots, or expanded rashes that look like a bullseye.

Where to look for tick bites

If you’ve been in areas where ticks are common, it’s important to do a quick body check and run your fingers gently over your skin. Ticks are often found behind the knees, between fingers and toes, and on underarms. It’s a good idea to check your belly button, neck, hairline, top of your head, and in and behind your ears, too.

If you’re having symptoms after a tick bite, it could be an indication that something more is going on. After you remove a tick, watch for symptoms of tick-borne illnesses which usually begin 3-30 days after the tick bite. They include:

It’s important to see your doctor if you develop these symptoms. Even if you’ve had Lyme disease in the past, you can still contract the infection again and may need treatment for a second infection.

While most ticks don’t carry disease, it’s important to be aware of common tick illnesses, including:

How to remove a tick

The longer a tick is on your skin, the more likely you are to experience symptoms or contract a tick illness. If you find a tick embedded on yourself or a family member, remove it as soon as possible following these steps:

Most tick bites don’t require a doctor’s visit. In fact, you can treat a lot of tick bites right at home. To relieve itching, redness, swelling and pain you can:

When to worry about a tick bite

Generally, tick bites are not a cause for concern, but you should reach out to a doctor if:

When HealthPartners patients need advice from a professional, we make it easy to talk to a nurse 24/7 about all sorts of health questions, including tick bite symptoms and treatment. Call 612-339-3663 or 800-551-0859 to speak with one of our knowledgeable nurses.

And if extra care or examination is needed, you can always make an appointment with your primary care doctor or your child’s pediatrician.